Last year, actor Colin Ferguson joined the Hope2Haiti team on its trip to Jacmel. While he was there, he met Roselaure—and as you can see from this photo, they soon became fast friends. Why, then, did this photo of a warm hug between them make the director of the Art Creation Foundation For Children (ACFFC) cry? Well, first you need to know a little more about Roselaure.

Georges, the ACFFC executive director, met Roselaure on the street not long after the Haiti earthquake where she was working, carting water. Seeing something special in her, he met with her mother and grandmother and asked if Roselaure could come and take part in the art and education programs at the ACFFC. Thankfully for Roselaure, they agreed.

When Roselaure first arrived at the centre, she wouldn’t play with the other kids. She flinched away from human contact—she was a child who had clearly seen the worst of human nature. Even in the safe environment of the ACFFC, she continued to be on her guard, afraid of the other children and adults around her. She would arrive wearing dirty and tattered clothing and was sent home time and again with clean and fresh outfits.

Last year, at nine years old, Roselaure passed first grade on her second try. Although still shy of contact with others, a group of girls in the ACFFC had taken her under their wing and acted as her unofficial ‘protectors’ while the cautious young Roselaure did her best to learn to trust.

Then, with Random Act’s visit last year, Roselaure met Colin and the rest of the team, and some of her walls seemed to come down. Enough to see her laughing and, most incredibly, hugging another person.

And the good news is, Roselaure’s new trust has continued. The staff at ACFFC have reported on the way Roselaure now joins them for dinner, and has even climbed onto someone’s lap!

Judy Hoffman, President of the ACFFC, said, “I was so happy to see this photograph of her. It is the first time she is looking at all free.”

Roselaure still faces a battle. Her mother and grandmother aren’t yet convinced of the importance of Roselaure attending school. And she is yet to pick up a paintbrush—she still hasn’t quite worked out how to express herself. But the staff at the ACFFC—funded in part by Random Acts—are continuing to work with her. To ensure that she grows up to see physical affection like hugs as most of us do: simple, daily acts of love and friendship. 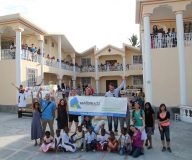 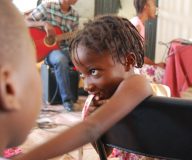 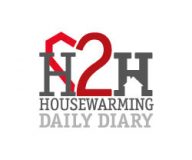